In admiring an Organ, there is always one bigger than yours.

In this case the Wanamaker Organ, located in Philadelphia at the Macy’s City Center, formally Wanamaker’s Dept. Store. Is the largest Pipe Organ in the world. (The Boardwalk Hall Auditorium Organ has more pipes but fewer ranks and at least 80% of the pipes have been unplayable for most of its existence. See below)

It is played at least twice a day Monday through Saturday, and more frequently during the Christmas season. The organ is featured at several special concerts held throughout the year, including events featuring the Friends of the Wanamaker Organ Festival Chorus and Brass Ensemble. 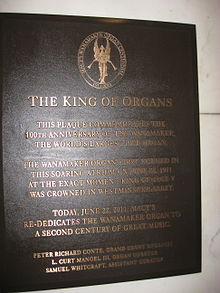 The Wanamaker Organ was originally built by the Los Angles Art Organ Company, successors to the Murray M. Harris Organ Co., for the 1904 St. Louis World’s Fair. It was designed to be the largest organ in the world, an imitation of a full-size orchestra with particularly complete resources of full organ tone including mixtures. In addition to its console, the organ was originally equipped with an automatic player that used punched rolls of paper, according to the Los Angeles Times of 1904. It was designed by renowned organ theorist and architect George Ashdown Audsley. Wild cost overruns plagued the project, with the result that Harris was ousted from his own company. With capital from stockholder Eben Smith, it was reorganized as the Los Angeles Art Organ Company, and finished at a cost of $105,000 (equal to $2,765,389 today), $40,000 over budget, equal to $1,053,481 today. The Fair began (in late April 1904) before the organ was fully installed in its temporary home, Festival Hall. It still was not entirely finished in September of that year, when Alexandre Guilmant, one of the most famous organists of the day, presented 40 very well-attended recitals on the organ.
Technically the Boardwalk Hall Auditorium Organ pipe organ in the Main Auditorium of the Boardwalk Hall (formerly known as the Atlantic City Convention Hall) in Atlantic City, New Jersey, built by the Midmer-Losh Organ Company. It is the largest organ in the world, as measured by the number of pipes (officially 33,112, but the exact number is unknown). So with all that said we’d like to see your Organs. No need to feel intimidated the organs above were built to fill enormous spaces. But if you’d like to show off you Lodge Organ, something your Lodge is proud of, just click on the Submit Posts link under the Blog menu and post it. We’d love to see it!

Not Organ music but worthy of note - Freestone